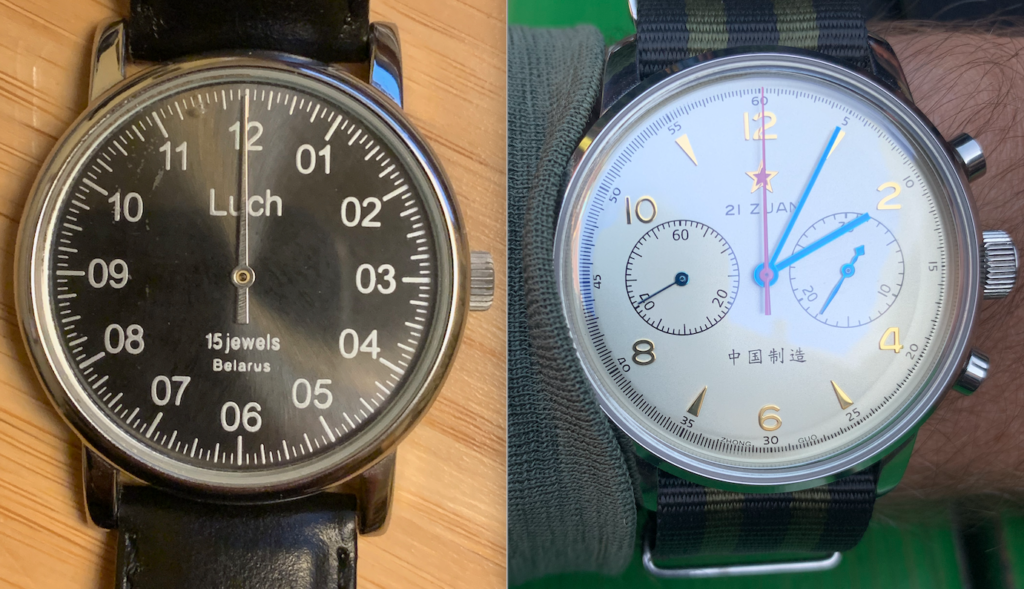 Several days ago I wore my cheapo Belarussian one-hand watch. This watch only has an hour hand, but the hand stretches all the way out to the edge of the watch, like the minute hand of a normal watch. The dial is marked with five-minute hash marks, and it turns out it’s quite easy to read it within two or three minutes even without a minute hand. I glanced at it on the dresser at some point and noticed that the hand had stopped exactly at the 12. Amazing! What are the odds?!

I left my house later that morning — the same morning I noticed the watch had stopped at 12 — to meet a friend for lunch. I was wearing a different watch, one with a chronograph (basically a stopwatch) and I started it as I stepped out the door, curious about how well my estimated travel time would match reality. Unfortunately I forgot to stop the watch when I arrived, indeed forgot all about it until my friend and I were sitting down chatting. I reached down and stopped the chronograph without looking at it. When I finally did look at it, several minutes later, I was astonished — astonished, I tell you! — to see that the second hand had stopped exactly at 12.

I started to write out some musings about the various reasons this sort of thing is not actually surprising, but I’m sure most of us have already thought about this issue many times. So just take this as one more example of why we should expect to see ‘unlikely’ coincidences rather frequently.

(BTW, as you can see in the photo neither watch had stopped exactly at 12. The one-hand watch is about 45 seconds shy of 12, and the chronograph, which measures in 1/5-second intervals, is 1 tick too far).