In normal times, policing has been America’s primary response to a host of societal ills that cannot be solved by punishment. Homelessness, mental illness, violence, racism, poverty, and toxic masculinity are all fed through the criminal justice system, rather than getting addressed in any meaningful way, never mind resolved. Now we expect police officers to contain this virus for us, even as they too become infected. Even though trying to arrest our way out of this just puts everyone in more danger. . . .

The problem with the way the government has failed to contain this crisis is that now, stopping the coronavirus has shifted to be a matter of personal responsibility. . . .

When the virus first entered the U.S., the people who could have done something to contain it did nothing. They didn’t even bother to track it. Meanwhile, South Korea and Taiwan immediately instituted widespread testing, created “quarantine hotels,” and deployed their robust social safety nets to ensure everyone could have basic needs met while staying indoors. Those countries have seen far lower infection rates than the U.S. . . .

Letting fear guide our responses won’t lead to measures that make anyone safer. And when a policy response is designed around the worst of the worst—the exceptions—we get nonsensical and brutal systems. . . .

This reminds me of some things we’ve been talking about lately about the tension between individual and group decision making.

To return to Shen’s article, another thing we’ve been thinking about a lot is how wrong many of us have been in our expectations of the coronavirus epidemic. I read this comprehensive news article from a few days ago by Yasmeen Abutaleb, Josh Dawsey, Ellen Nakashima and Greg Miller about how unprepared the country has been: “From the Oval Office to the CDC, political and institutional failures cascaded through the system and opportunities to mitigate the pandemic were lost”:

It did not have to happen this way. Though not perfectly prepared, the United States had more expertise, resources, plans and epidemiological experience than dozens of countries that ultimately fared far better in fending off the virus. . . . Warnings were sounded, including at the highest levels of government, but the president was deaf to them until the enemy had already struck.

The Trump administration received its first formal notification of the outbreak of the coronavirus in China on Jan. 3. Within days, U.S. spy agencies were signaling the seriousness of the threat to Trump by including a warning about the coronavirus — the first of many — in the President’s Daily Brief. And yet, it took 70 days from that initial notification for Trump to treat the coronavirus not as a distant threat or harmless flu strain well under control, but as a lethal force that had outflanked America’s defenses and was poised to kill tens of thousands of citizens. That more-than-two-month stretch now stands as critical time that was squandered.

But it was not just the president. As of January, even through late Februrary, I had no sense of the severity of the problem. Sure, I wasn’t as bad as this guy, but that’s a pretty low standard.

Why were I and others so wrong? I think because of a natural and unavoidable division of labor, which is that that most of the time we think about our own individual decisions, with the assumption that larger organizations will work out group and societal decisions. In January and February, there wasn’t much for any of us to do as individuals, and even the individual decisions we could make—for example, wearing masks or buying extra food for our pantry—were not going to have much direct effect on us and weren’t particularly urgent in any case. But, as we’ve learned, these decisions, in addition to societal decisions such as not to institute mass testing for the virus, were urgent and consequential at the national and global levels.
Nassim Taleb and Joseph Norman put it well: 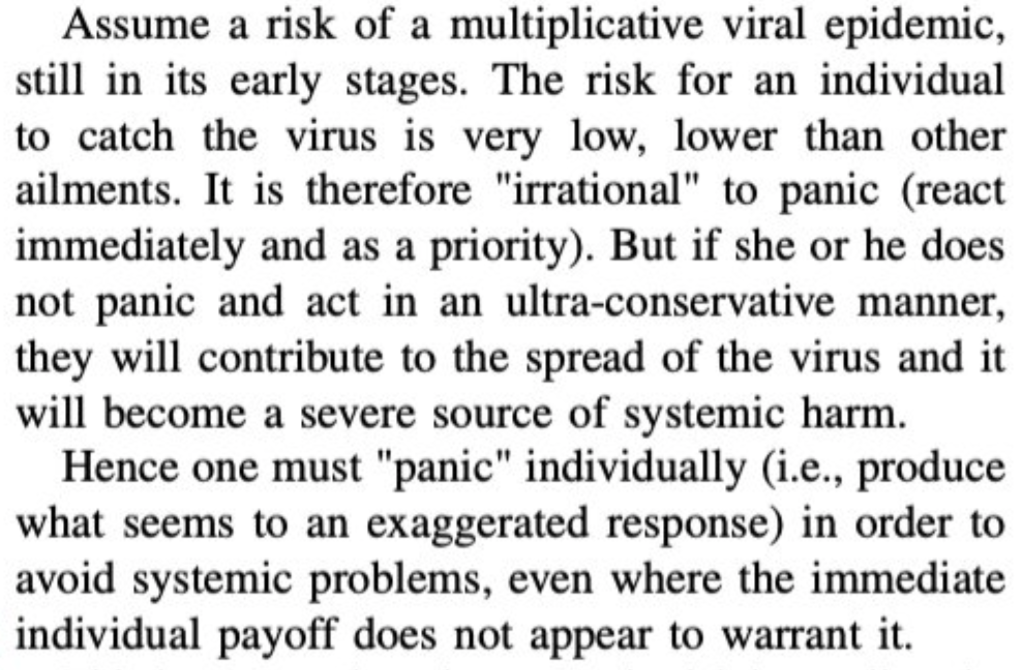 We’ve been trained and coached and nudged:
(a) to think of larger social outcomes in terms of the aggregation of individual decisions, and
(b) when thinking about social decisions, to have a very narrow palette of options, pretty much limited to policing, wars, and throwing money at a problem.
Recall the newspaper headlines during those couple of weeks in March when it became clear that coronavirus would be a major problem in this country: lots of talk about the stock market, followed by lots of discussion of how many hundreds of billions of dollars would be thrown at the problem. I’m not saying that massive government spending is a bad idea here, just that it was bit of a simplification to focus on the How much? question, rather than on the What’s being done? question.

Again, my point here is not to criticize others. I’ve pretty much been going through the same sequence of thoughts as a lot of other people on this one. I’m a statistician, but it’s not like in January I was screaming that we need a billion test kits. There were some Cassandras back then, but I wasn’t one of them. The social science in this post of mine is largely introspective: What were the mental roadblocks getting in the way of clear thinking for me? I think part of it was that my implicitly individualistic perspective. Hence my appreciation for the above-linked article by Shen’s.

P.S. I made the mistake of looking at the comment thread on that Slate article. Oof! Seeing that sort of thing makes me realize how lucky we are to have the commenters we have here.

P.P.S. Speaking of Taleb, I just saw this great line:

Do not conflate doing science and being nice and polite to scientists.