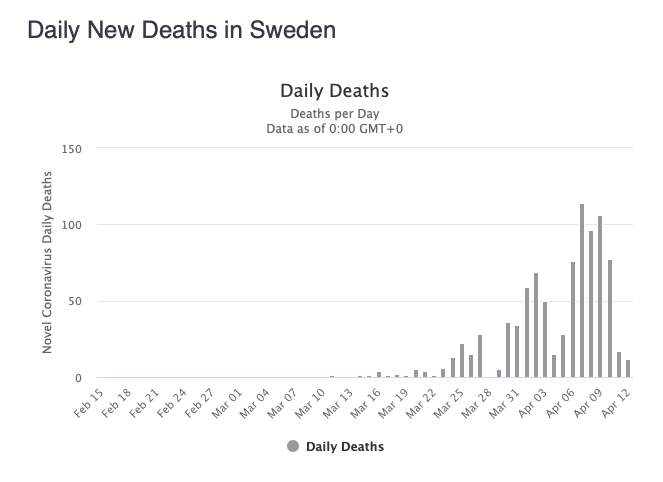 A lot of people are paying attention to Sweden, to see how their non-restrictive coronavirus policies play out. Unlike most other countries in Europe, they have instituted few mandatory measures to try to slow the spread of the virus. Instead, they’ve taken a ‘softer’ approach, telling people the risks and asking people to make good choices. And people are certainly changing behavior: according to Google’s mobility reports , as of April 5 the use of transit stations was down 37%, workplaces were down 10%, and retail establishments were seeing 25% less traffic. So there’s definitely some ‘social distancing’ going on, although not nearly as much as, say, Norway (retail down 60%, workplaces down 32%).

So…what’s the result? How do deaths in Sweden compare to other countries? Well, on paper they’re doing OK, with deaths doubling every 5 days. That’s not as good as their neighbors (Denmark, Finland, and Norway are all around 6-7 days, and that’s a difference that adds up, or rather multiplies up, over the course of a month or two) but it’s about the same as Belgium and, well, hard decisions have to be made and conceivably the Swedes could feel that this is the right balance of economy versus deaths.

But: I don’t trust the numbers coming out of Sweden. See the attached plot of coronavirus deaths by date. I think we can all agree that people are dying on weekends, they’re just not being reported. If this were just some clerical thing, like deaths not being counted until the clerks show up at the office on Monday, then we would expect that either the numbers would be corrected over time, or that there would be a big spike on Mondays when the weekend deaths are counted, but we don’t see either. (The plot is from Worldometers and the numbers match those that are reported daily in the New York Times).

As the world tries to figure out how to manage an end to the shutdown that’s in place in many countries, data from countries like Sweden that are doing things differently should be very valuable. But only if we can trust the data. Anyone have any idea what is going on with the death count in Sweden? I don’t.