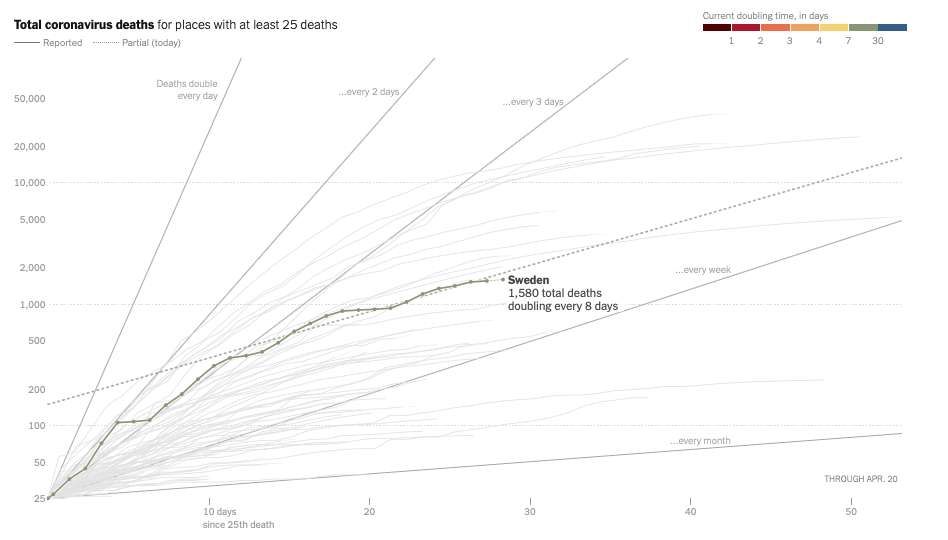 I’m going to say right up front that I’m not going to give sources for everything I say here, or indeed for most of it. If you want to know where I get something, please do a web search. If you can’t find a source quickly, leave a comment and I’ll edit this post to provide one. For instance, I say below that many epidemiologists think a fairly substantial percentage of people with COVID-19 infections have no symptoms or only extremely mild symptoms, but I don’t provide a source. If you use your favorite search engine to search for, say [coronavirus asymptomatic] and you don’t see sources that agree with me, let me know. I agree it’s better to provide sources but I have work deadlines and I just don’t want to take the time. It’s bad practice but hey, this is just a blog.

I hope we are all rooting for Sweden to find a way to limit coronavirus fatalities to a reasonable level while also maintaining their economy at a reasonable level. That would be a great thing for the Swedes, of course, but would also point a way forward for the rest of the world as we eventually try to let the economy get moving again. To me, the key distinction isn’t between voluntary restrictions on behavior (like Sweden’s) and requirements (like most of the rest of the world), but rather between whether non-essential interpersonal contact is or isn’t happening. If the Swedes are merely doing voluntarily what other countries are doing by law, the economic and social effects are going to be pretty much the same. But if they are implementing sufficient safety controls to limit the spread of the virus, and doing so in a way that permits most economic activity to continue, then we can do the same.

I do think it’s possible for a lot of business to proceed in an acceptable manner during the pandemic. I gave an example in a comment yesterday: the company that installed my HVAC system is still working, although doing many fewer jobs than usual, and they’re doing so in a way that I think is responsible. In normal times, they send a two-person crew to most jobs: a skilled HVAC professional and an assistant who schleps equipment and parts from the truck, wraps insulation, cuts metal, etc., under orders from the experienced person. But now they’re just sending one person to most jobs, even though it takes a lot longer and they now have an expensive person doing work that could be done by an inexpensive person. When they do have to send a pair of people, it’s two people who are only ever paired together, so if one of them gets sick they only put the other one at risk, they don’t rotate through the whole workforce. They ask the client to vacate the residence or at least the area of the residence where they’re working. They wear gloves and masks. Even thought they’re stretching and perhaps breaking the law on social distancing (here in the California Bay Area) by doing some nonessential work, it’s my informed judgment that what they are doing is OK.

So I can at least imagine a society in which companies shut down if they can’t provide a low-transmission work environment, but continue to work if they can do so safely, and in which people continue to see each other socially but do so in a responsible manner. I definitely, definitely would not trust the United States to be that society, at least not voluntarily, but maybe Sweden can manage it. Swedish politicians have said Sweden is special in that regard — more responsible to each other, more willing to follow government advice — and I can well believe that’s true, especially compared to the U.S. And if that’s the case, we in the U.S. can try to codify what works and make it happen here too.

Of course, there’s also the possibility that, even if Sweden is successful, that success simply can’t be replicated in the U.S. For instance, diabetes seems to increase the risk of death’ from the virus and I think we have a lot more diabetes here than in Sweden. Maybe true of other risk factors too.

And we know Swedes have been doing a lot voluntarily. According to the most recent Google Mobility Report (unfortunately from 9 days ago), person-hours at Swedish ‘retail and recreation’ sites were down 40%, transit stations about the same, and workplaces down 25%. Sweden has done a fairly substantial partial shutdown.

On the one hand some people say Sweden has pretty much won, they have the virus under reasonable control while maintaining a fairly healthy economy. On the other hand, they just moved into 10th place in deaths as a percentage of population, and seem on track to keep climbing the list: unless something changes they will soon take over 9th place from Switzerland, since Swiss deaths per million people only increased 40% in the past week, whereas Sweden’s doubled.

I’m going to set aside the economic question, because other than knowing Volvo is about to restart production in Sweden I know nearly nothing about Sweden’s current economic situation and I don’t have time to look into it. But I have been looking at the progress of the disease there, based on the sources I’m aware of, and…well, it’s a mixed bag.

As I mentioned in a previous post, Sweden’s death numbers show an odd pattern on Worldometers and the New York Times coronavirus stats page: they have a severe weekend undercount, which they correct later, but these sites only keep track of the latest totals, they don’t go back and adjust when they happened. That is, a coronavirus death is counted on the day it is reported rather than the day it occurred, and this seems to be a bigger issue for Sweden than for other countries. The effect happens on non-weekends too, it’s just smaller. Anyway it’s clear that on any day there is an undercount, which I suspect (not sure) may be a larger fraction in Sweden than in other countries.

So, as of yesterday (Sunday April 19) they had at least 1580 coronavirus deaths, with deaths doubling every 8 days or so and no noticeable downward curvature on a log plot over the past two weeks. Most other countries that are at least a month past their first deaths seem to have slowed the increased the doubling time to more than 10 days, usually more than 12. And those doublings really multiply up over time: Four doublings in a month rather than three, that’s…well, that’s an additional factor of two in deaths, is what that is. Viewed through this lens, Sweden’s approach does not seem like a success. Yes, in deaths per capita they are still way under Belgium and Spain and Italy and the UK, but those are all countries that got started earlier and didn’t implement any kind of social distancing until it was too late to prevent mass casualties. Sweden, like the U.S., had time to learn from those other experiences.

So that’s the bad news.

The good news is, Sweden has not had the huge surge of cases (and subsequent deaths) that would have been expected if they weren’t taking effective measures at slowing the spread of the virus. Those voluntary measures they’re taking are definitely helping tremendously.

You know, even just writing this post has helped me put things in perspective. When I started writing I was baffled by what I saw as contradictions between claims coming from Sweden that they had been successful in controlling the virus while maintaining their economy, and the death numbers that seem to show no such thing, but now that I’ve looked at the numbers again and read a few opinion pieces again I am no longer baffled, I simply think there are different definitions of ‘success.’ Sweden avoided overwhelming their emergency health care system, as happened in Italy and Spain and New York. Maybe that’s what they mean by success. Yes, their per capita death count is still increasing faster than that of most of their peers, but not by a huge amount, and presumably they think they can bring the growth rate down soon. They might end up in the top eight or top five countries in deaths per capita — they’ll be number 9 in a few days — but that means there are several other countries that would be thrilled to be in their position just in terms of deaths per capita, and Sweden’s economy is presumably stronger too (I assume. As I said, I know nearly nothing about their economy). If avoiding the fate of Belgium and Spain and Italy is ‘success’ then Sweden is a success. To me that seems like an awfully low bar, but different people have different values and I’m sure lots of people would agree that that makes their approach a success.

Funny, by thinking about this post as I was writing it I have rendered it uninteresting to me. But what the hell, I’ll post it anyway, at this point the effort is all sunk cost.