The following article made it to the national news in Canada this week.

I [Hunter] read it and was fairly appalled by their statistical methods. It seems that they went looking for a particular result in Canadian birthrate data, and then arranged to find it. Figure 1 looks like random variation to me. I don’t know if it warrants mention in your blog, but it did get into the British Medical Journal.

That’s too bad about it being in the British Medical Journal. Lancet, sure, they’re notorious for publishing politically motivated clickbait. But I thought BMJ was more serious. I guess anyone can make mistakes.

Anyway, getting to the statistics . . . the article is called “Outcome of the 2016 United States presidential election and the subsequent sex ratio at birth in Canada: an ecological study,” and its results are a mess of forking paths:

We hypothesised that the unexpected outcome of the 2016 US presidential election may have been a societal stressor for liberal-leaning populations and thereby precipitated such an effect on the sex ratio in Canada. . . . In the 12 months following the election, the lowest sex ratio occurred in March 2017 (4 months post election). Compared with the preceding months, the sex ratio was lower in the 5 months from March to July 2017 (p=0.02) during which time it was rising (p=0.01), reflecting recovery from the nadir. Both effects were seen in liberal-leaning regions of Ontario (lower sex ratio (p=0.006) and recovery (p=0.002) in March–July 2017) but not in conservative-leaning areas (p=0.12 and p=0.49, respectively).

In addition to forking paths, we also see the statistical fallacy of comparing significant to non-significant.

To their credit, the authors show the data: 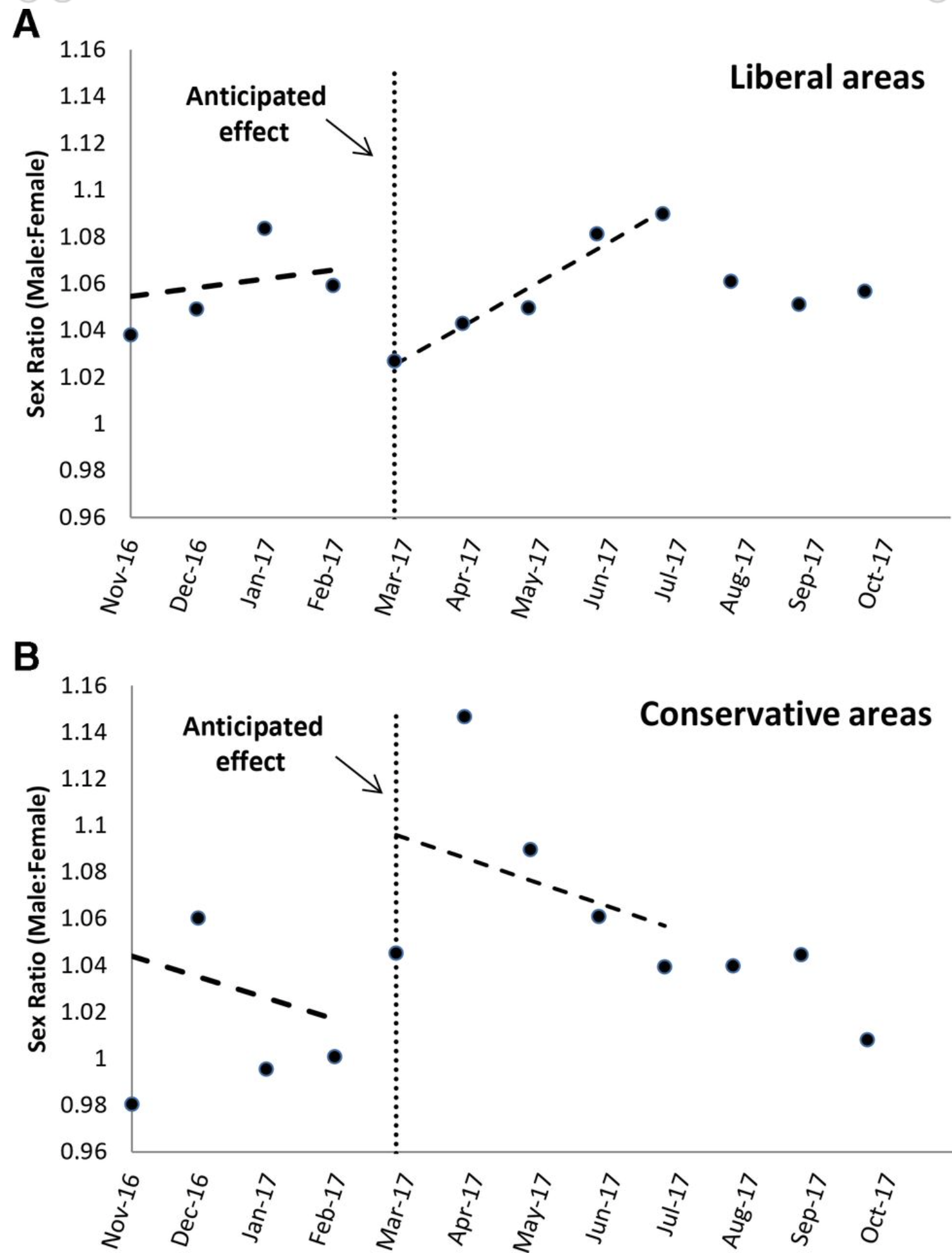 As is often the case, if you look at the data without all those lines, you see something that looks like a bunch of numbers with no clear pattern.

The claims made in this article do not represent innumeracy on the level of saying that the probability of a tied election is 10^-90 (which is off by a factor of 10^83), and it’s not innumeracy on the level of that TV commenter and newspaper editor who said that Mike Bloomberg spent a million dollars on each voter (off by a factor of 10^6), but it’s still wrong.

In short: this study was dead on arrival. But the authors fooled themselves, and the reviewers, with a blizzard of p-values. As low as 0.002!

So, let me repeat:

– Just cos you have a statistically significant comparison, that doesn’t necessarily mean you’ve discovered anything at all about the world.

– Just cos you have causal identification and a statistically significant comparison, that doesn’t necessarily mean you’ve discovered anything at all about the world.

– Just cos you have honesty, transparency, causal identification, and a statistically significant comparison, that doesn’t necessarily mean you’ve discovered anything at all about the world.

– Just cos you have honesty, transparency, causal identification, a statistically significant comparison, a clear moral purpose, and publication in a top journal, that doesn’t necessarily mean you’ve discovered anything at all about the world.

Sorry, but that’s the way it is. You’d think everyone would’ve learned this—it’s been nearly a decade since that ESP paper was published—but I guess not. The old ways of thinking are sticky. Sticky sticky sticky.

Again, no special criticism on the authors of this new paper. I assume they’re just doing what they were trained to do, and now what they’re rewarded to do. Don’t hate the player etc.