Asher Meir points to this hilarious post by Alexey Guzey entitled, Matthew Walker’s “Why We Sleep” Is Riddled with Scientific and Factual Errors.

Just to start with, the post has a wonderful descriptive title. And the laffs start right away: 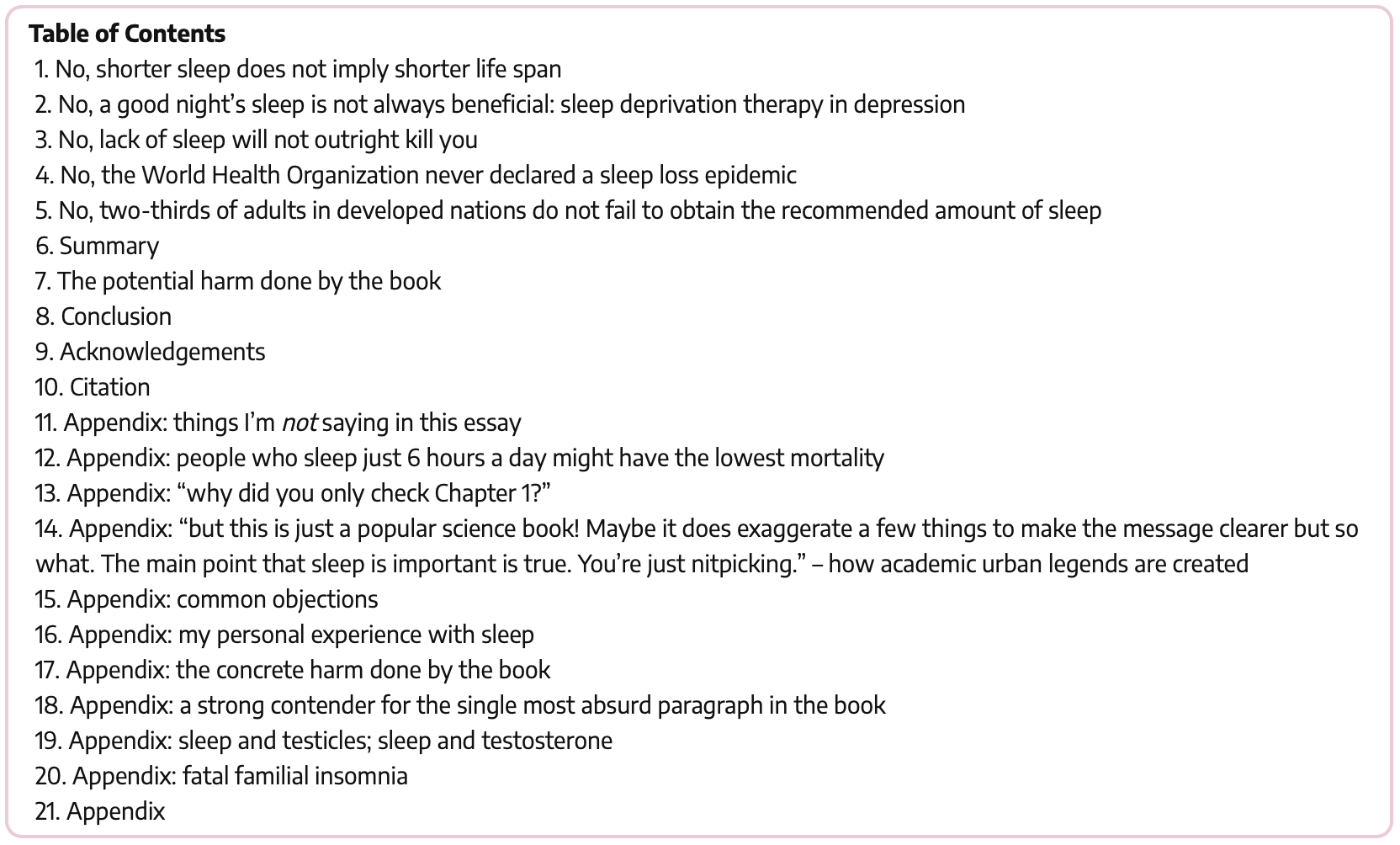 Positively Nabokovian, I’d say. I mean it. The above table of contents makes me want to read more.

I’ve not read Walker’s book and I don’t know anything about sleep research, so I won’t try to judge Guzey’s claims. I read through and I found Guzey’s arguments to be persuasive, but, hey, I’m easily persuaded.

After reading various sparkly, hard-hitting bits of Guzey’s post, I was gonna say, “Get this man [Walker] a Ted talk!” But apparently he does have a Ted talk. From Guzey:

I haven’t had this much fun reading something online since the days when Gawker was publishing.

Anyway, it seems that Walker’s Ted talk is called “Sleep is Your Superpower.” Your superpower. How Ted can you get?? The modern world is really wasted on us, without Veronica Geng to mock it for us.

Guzey reports, “Matthew Walker is a professor of neuroscience and psychology at the University of California, Berkeley, where he also leads the Center for Human Sleep Science. . . . His book Why We Sleep . . . was praised by the New York Times . . . was named one of NPR’s favorite books of 2017 . . .”

OK: neuroscience professor at major university, praised by NYT and NPR . . . and he even published an article in the Lancet! We’re touching all the bases here. What next, a collaboration with Dr. Anil Potti?

Guzey continues: “A month after the book’s publication, he became a sleep scientist at Google.”

I’ll have to say, if it’s really true what Guzey says that Walker’s book is riddled with errors, there’s something satisfying about hearing that Walker got a job at Google. We have this image of Google as some sort of juggernaut. It’s good to hear that they can make mistakes too, just like scientific journals, universities, news outlets, etc.

Let me tell you a story. I went to graduate school at Harvard. Finest university in the world. My first day in a Harvard class, I was sitting with rapt attention, learning all sorts of interesting and important things (for reals; it was an amazing class that motivated me to become a statistician), sitting at one of those chairs with a desk attached to it, you know, the kind of chair where the desk part flips up so it’s in front of you, and, on the bottom of that desk was a wad of gum.

Back when I was in junior high, gum was almost a form of currency. I’d buy a pack of grape Bubble Yum for a quarter at the corner store on the way to school, then chew it in the morning during the endless hours between first period and lunch. I’d put one piece of gum in my mouth, chew it until it lost all its flavor, then add the second piece, chew it etc., and continue until I had a massive wad, all five pieces, ultimately flavorless, and I’d chew and chew and blow huge bubbles when the teacher wasn’t looking.

I’m not trying to make myself out into some big rebel here; the point is, we all did that. So of course there was yucky gum under all the desks. You knew to never run your hands under a desk, cos you never knew what might turn up. That was junior high.

Then in high school, everyone was much more mature, a lot less gum chewing . . . but still, gum under the desks. I took classes at the University of Maryland, a fine university with an OK basketball team . . . still, they had gum. Then I went to MIT, one of the finest engineering schools in the world . . . yup, gum. But Harvard? I’d hoped Harvard was better than that. But it wasn’t.

Anyway, that’s how I felt, learning that this purveyor of (possibly) horribly false claims is not just a professor of neuroscience at a top university—we know that top universities have lots of frauds—but was hired by Google. Google! Here I am, almost sixty years old (I don’t feel close to 60, but that’s my problem, not yours), and still there’s room for disillusionment.

Anyway . . . the next question (again conditional on Guzey’s statement that Walker’s book is riddled with errors) is, where does Walker fit in here? Did he not fully read the sources he cited in his book? Did he write much of the book from memory, and just misremember a lot of things? Does he think that it’s ok to get the facts wrong in service of a larger truth? Is he just confused? Maybe he didn’t write the book himself, perhaps he had an army of incompetent research assistants?

Just as an example, here’s the first item in Guzey’s post: 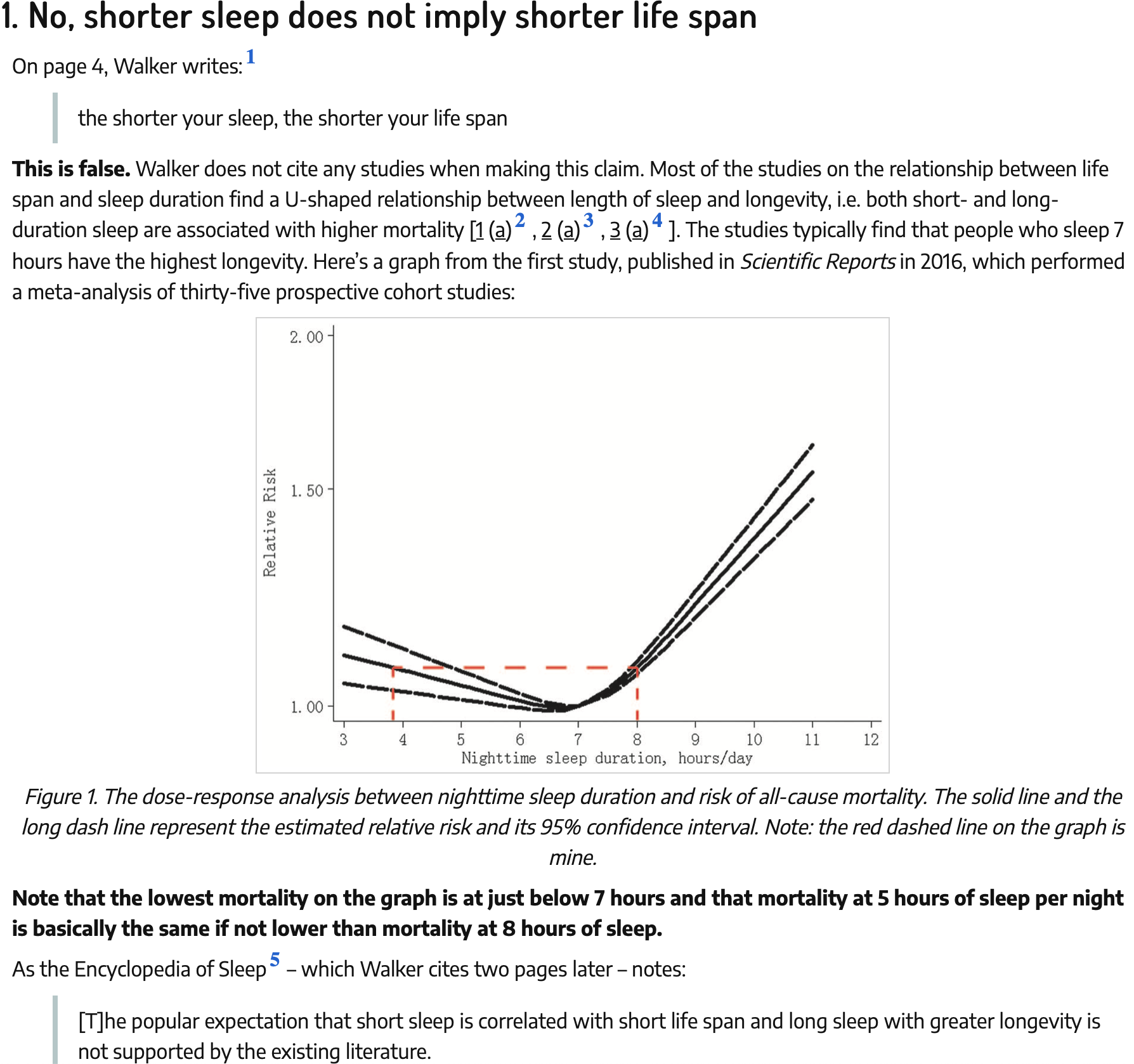 The question is: what was Walker thinking when he wrote things like, “the shorter your sleep, the shorter your life span” or “Routinely sleeping less than six or seven hours a night demolishes your immune system, more than doubling your risk of cancer”? I guess someone will have to ask him. I wonder about this a lot, when people write things that are not supported by the data. It’s my impression that people often write things that sound good, without always thinking about their literal meanings.

What was Walker thinking when he wrote, “every species studied to date sleeps”?? Did he forget what he’d read in that 638-page book? Did he read the passage in question so quickly that he took from it the opposite impression? Perhaps he was working from memory, and forgot some things? I have no idea.

OK, I can’t resist. Here’s another:

Again, maybe I’m missing the whole point. Walker should feel free to take a few moments from his jobs at Berkeley and Google to respond in comments to explain how Guzey is misrepresenting the evidence, or if there’s something else going on. I’m open to the possibility.

Or if Walker did get all these things wrong . . . then maybe he can write something to thank Guzey for pointing out the errors. I make mistakes all the time—it happens!—and when I learn about them, I feel bad. Maybe Walker will learn about this and feel bad and figure out how to do better next time. I don’t think Brian Wansink ever got around to thanking people for finding all the errors in his papers, but I think he should’ve.

In the meantime, I appreciate that Guzey wrote his post directly and didn’t bother being polite. Politeness is fine, but it has a cost. First, a polite version of the post would be less fun to read, and less fun means I’d be less likely to read it, which would be a shame, given that this is an important topic. Second, I’m guessing that rewriting this post more politely would take a lot of effort on Guzey’s part, which would mean that maybe he wouldn’t have written it at all, or he would’ve included less information, or that he’d have less time to do other stuff. And that would be unfortunate. Guzey’s time is valuable too.

I wouldn’t’ve wanted Mark Twain, Veronica Geng, or David Sedaris to have worried too much about politeness either. I’m sure Guzey makes mistakes too. That’s ok. Mistakes are mistakes, even when written politely.

And, if it turns out that Guzey got it all wrong regarding Walker’s book, then fine, I’ll report back and update this post accordingly. I wouldn’t be the first person to get fooled by something on the internet.

P.S. Personally, I looove sleep. I sleep 9 or 10 hours a night. OK, I don’t average 9 or 10 hours a night. My average has got to be less than 8, maybe even less than 7, because when I get too little sleep for a night or two, it’s not like I balance it with 11 hours the next night. What I’m saying is that 9 or 10 hours makes me comfortable: it’s how much sleep I’d get if I had no kids and never had an early-morning deadline. Based on my observations of others, I’m guessing I’ll need less sleep as I get older.

P.P.S. Some searching also turned up this amusing exchange:

To be fair, though, my colleagues and I once wrote a book with the subtitle, “Why Americans Vote the Way They Do,” but we never actually answered that question! In the book, all our empirical claims were carefully sourced and explained, but then we just said something silly the title. So don’t trust titles.

P.P.P.S. I had so much fun writing this post, and I’m such a damn perfectionist, I spent 2 hours on it! And now I’m getting to sleep really late, I’ll only get to sleep 7.5 hours at most. So I’ll be uncomfortable and tired in the morning (and I don’t even drink coffee! I never touch the stuff, just don’t like the smell and taste), and it’ll probably lower my productivity tomorrow. Damn. I do feel, though, that if I write what I write when I want to write it, eventually I’ll end up writing the things I should write, the way I want to write them.