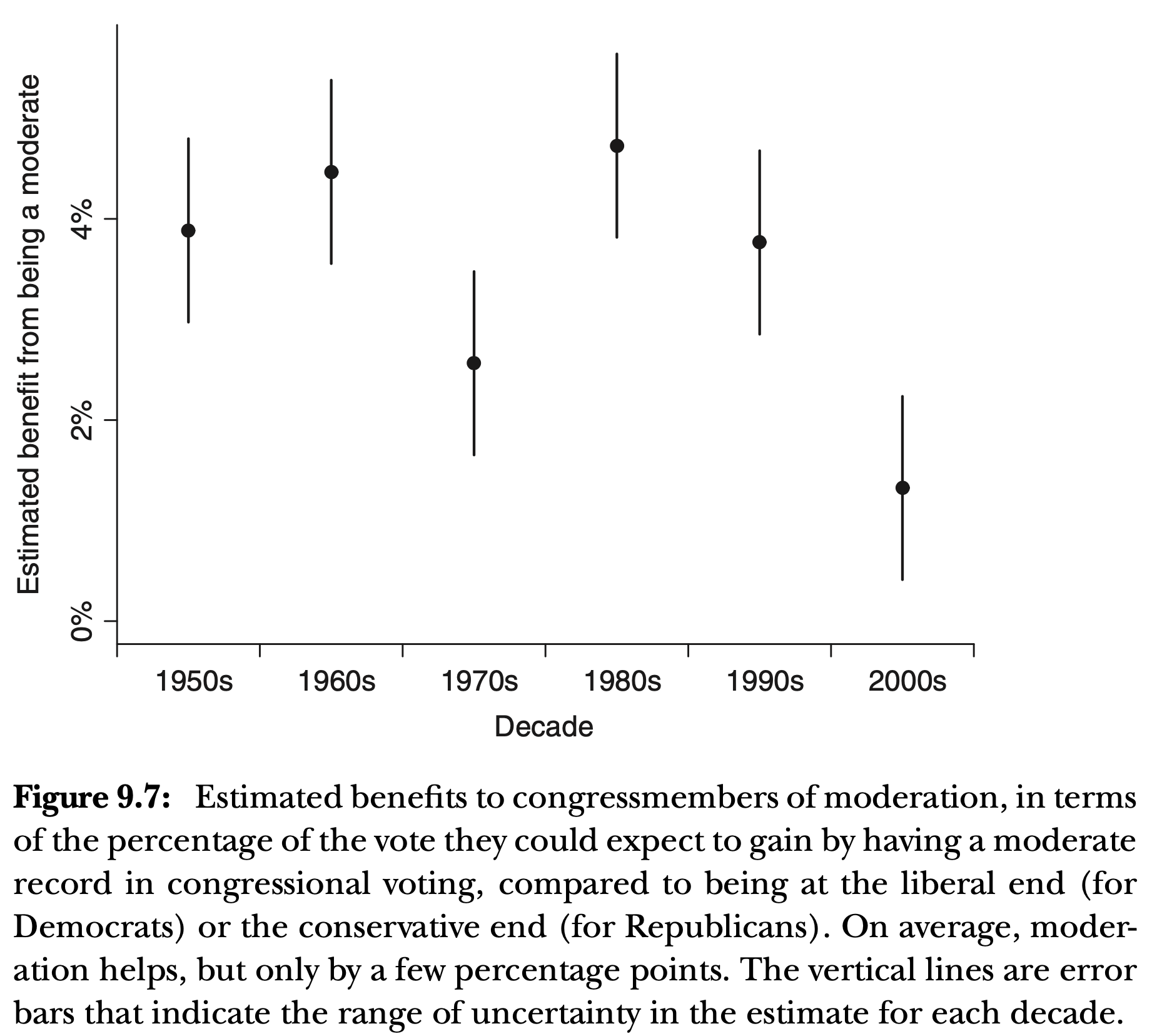 Decades of evidence from academic studies suggests that more moderate nominees tend to perform better in general elections than more ideologically extreme nominees. For example, [political scientist Alan Abramowitz found that] Democratic US House candidates who supported Medicare-for-all fared approximately 2.2 percentage points worse [on average] in the 2018 midterms than candidates in similar districts who did not. . . .

This makes sense to me. Just to clarify that last point: they’re not claiming that the act of supporting Medicare-for-all caused an average 2 percentage point drop in the vote; rather, they’re saying that candidates with that political position received on average 2 percentage points less of the vote, compared to candidates in similar districts who did not. The candidates who supported Medicare-for-all were, I assume, more left-wing on average than other issues as well. In this case, I’d take the position on Medicare-for-all is an (imperfect) measure of left-right ideology.

From that perspective, the 2 percentage point difference makes sense and is consistent with what we’ve found before on the small average electoral benefit for moderation (see here, for example) and the graph shown above, which appears in Red State Blue State.

2 percentage points of the vote is not much—and for the presidential race I’d expect a smaller effect, maybe 1 percentage point—but in some recent elections such as 2000 and 2016, a shift in vote of 1 percentage point could be enough to swing the election, so I agree with Broockman and Kalla that this is worth talking about. For example, after the 2016 election, I speculated that “Sanders’s ideological extremism could’ve cost the Democrats a percentage or two of the vote. . . . [but] Sanders could’ve won a million or two votes less than Clinton, and still won the election. . . .”

Broockman and Kalla’s new work on this topic focuses on an analysis of recent trial-heat polls. They write:

But early polling testing how Democratic nominees would fare against Trump suggests a different conclusion: Bernie Sanders, the most left-wing candidate in the Democratic primary, polls as well against Trump as his more moderate competitors in surveys. . . . Why does Sanders look similarly electable to leading moderates in polls against Trump? We fielded a 40,000-person survey in early 2020 that helps us look into this question with more precision. . . .

They conclude that, in these polls, Sanders does about 1 percentage point worse on average among existing voters compared to more centrist alternatives (Buttigieg, Biden, or Bloomberg; they didn’t check Klobuchar), but that, in the poll, “the large number of young people who say they will only vote if Sanders is nominated is just enough to offset the voters Sanders loses to Trump in the rest of the electorate.”

Democrats should not be very reassured by early polls that find Sanders faring as well against Trump as the more moderate candidates: These numbers may only look decent for Sanders because they assume he will inspire a youth turnout miracle. . . . The gamble Democrats supporting Sanders based on his early polls against Trump must be ready to make is that, despite the evidence to the contrary, the lowest-participating segment of the electorate will turn out at remarkably high rates because Sanders is nominated.

Mostly this makes sense, except that I think they’re overstating the case by framing things a bit too deterministically. The benefits of moderation only appear on average. I think it would be more accurate to say that Democrats supporting Sanders are also hoping that he will perform better among existing voters than is shown in these polls. But I agree with their general point that, if you want to base your analysis on these polls, it makes sense to try to untangle support among regular voters from anticipated changes in turnout.