Asher Meir points to this amusing post from Greg Mankiw, who writes:

Who has the best chance of beating Donald Trump? A clue can be found using Bayes Theorem.

So here are the results for P(A|B) as of now:

That is, the betting markets suggest that Mayor Pete would be the strongest candidate if nominated, with Joe Biden close behind. (Of course, these numbers will bounce around as the prices in betting markets change.)

By the way, when I [Mankiw] did a similar calculation in 2006, Bayes liked Barack Obama.

I copied Mankiw’s post in its entirety, with the only change being that he wrote P(A / B) etc., and I changed the slash to the vertical bar, P(A|B). (Are there people who write conditioning using a slash rather than a vertical bar? I had no idea. P(A|B) is more standard, I believe. In the above post, Mankiw links to the wikipedia page which uses the P(A|B) notation. No big deal, it just seemed odd to me.)

Anyway, I think the above set of calculations is a great example for teaching conditional probability.

The next step is to push a bit: Do we really believe these numbers? There’s nothing wrong with the probability calculations, but I’m not sure we should be taking Predictit’s betting odds as actual win probabilities.

To start with, I looked at Mankiw’s list and wondered what Yang was doing on it. Yang’s a fringe candidate, right? He’s polling at 0.8% on Real Clear Politics right now. I went over to Predictit and it says you can buy a Yang contract for the Democratic nomination for the price of 9%. Now, OK, sure, at 0.8% in the polls there’s room for improvement. But 9%??? Seems like a lot.

I know I’m leaving a hostage to fortune here, writing this now in June and scheduling the post for the end of November. If by that time Yang is a serious candidate I’ll add a P.S. to this post.

The next think I’m worried about, beyond bias in the online markets, is volatility.

Sure, Mankiw writes, “these numbers will bounce around as the prices in betting markets change,” but I think he’s not fully appreciating how noisy these numbers are!

Mankiw’s post is dated 27 Apr 2019. Predictit conveniently gives prices going back a few months, so I can do some Biden-Warren price comparisons of then to now:

Something weird was going on in April, when Biden’s price was 22 for the primary and 17 for the general election. This just can’t be right, and all I can conclude is that the betting markets here are thin enough that nobody was taking these numbers very seriously.

If you want to take the numbers as is, you’ll get the following:

These numbers aren’t quite right, even if you take these betting markets seriously, because of rounding and the vig. If you add up all the prices on the “Who will win the 2020 Democratic presidential nomination?” page, you get something well over 100%. So you can’t directly interpret these prices as probabilities, even beyond the issues of bias and noise.

I discussed this with David Rothschild, who thinks a lot about elections and prediction markets (for example, here), and David responded as follows:

Here is a figure from an old paper I wrote with David Pennock about the 2012 election. As you can see, while informative, it can get quite noisy! 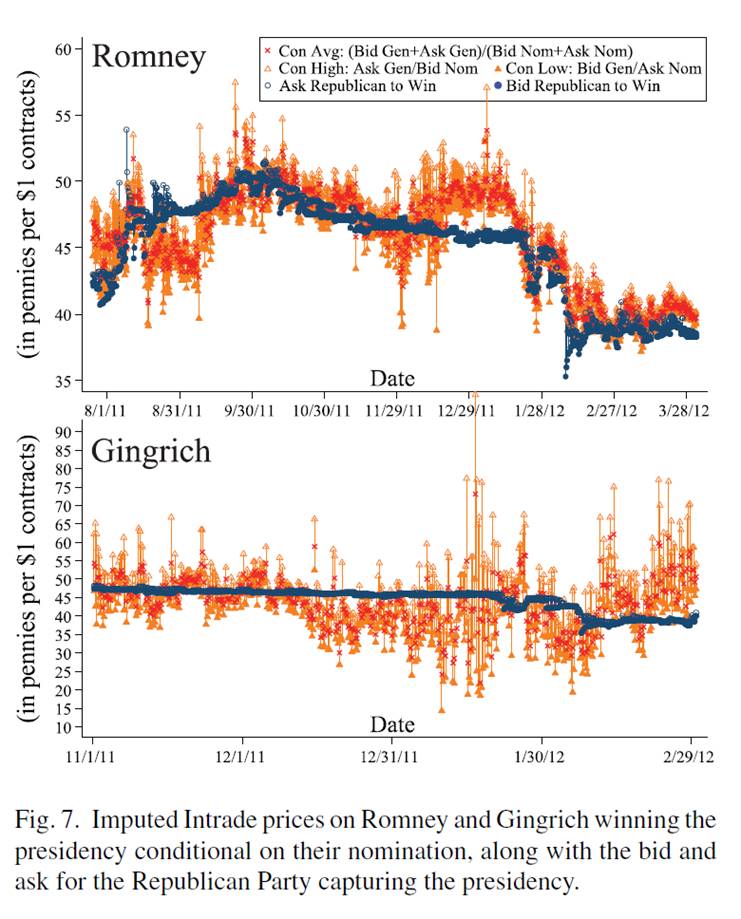 Anyway, my point here is not to criticize Mankiw but rather to thank him for putting out this fun example, and then to demonstrate how we can take it further by interrogating each step in the analysis. Which is how we do applied statistics in general.

It’s a fun example, but when we look at the data more carefully, the original conclusion goes away.