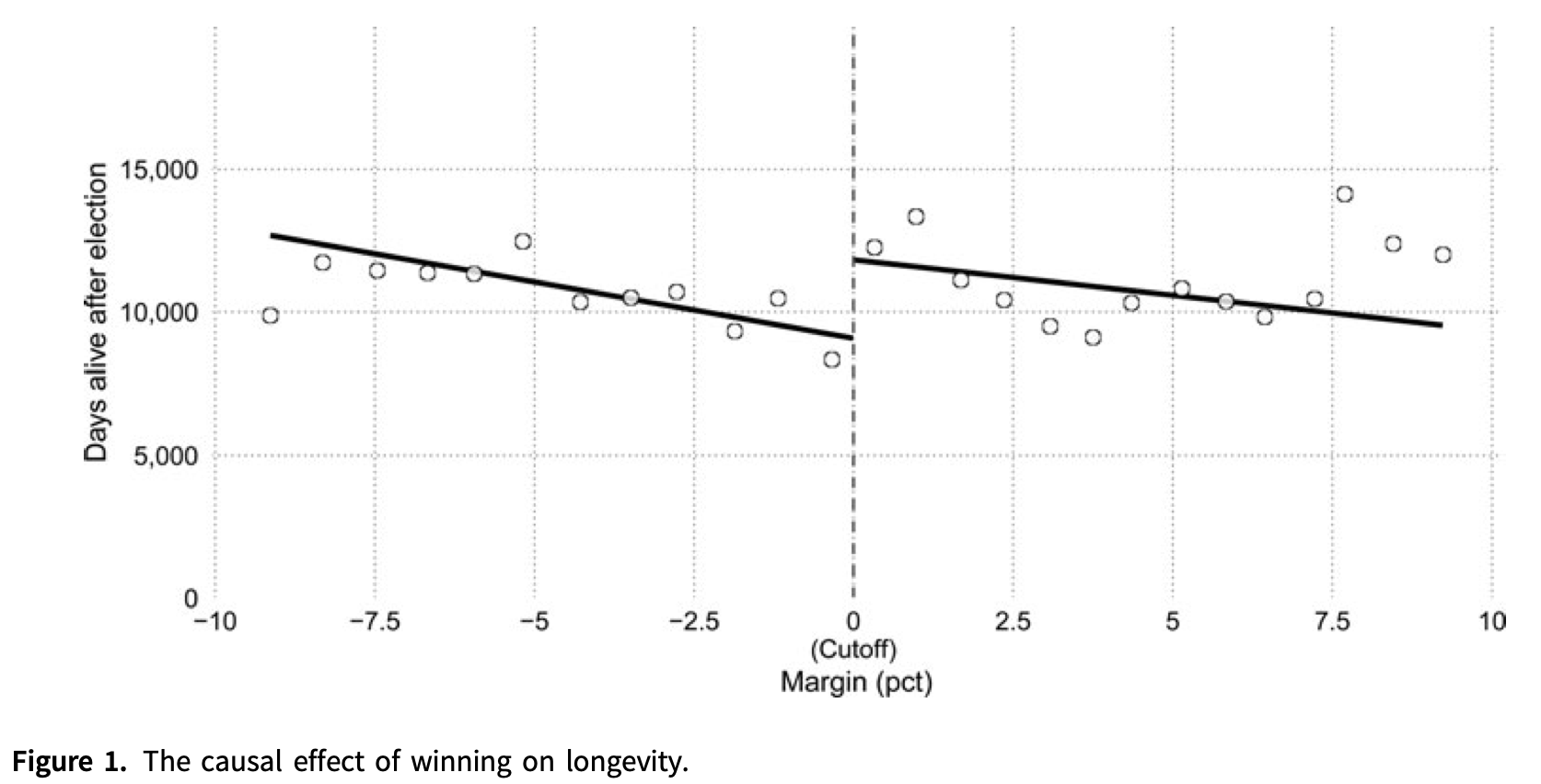 Despite the p-less-than-0.05 statistical significance of the discontinuity in the above graph, no, I do not believe that losing a close election causes U.S. governors to die 5-10 years longer, as was claimed in this recently published article.

Or, to put it another way: Despite the p-less-than-0.05 statistical significance of the discontinuity of the above graph, and despite the assurance of the authors that this finding is robust, no, I do not believe that winning a close election causes U.S. governors to live 5-10 years longer.

How can I say this? I will answer in five ways:
1. Common sense
2. Our experience as consumers of research
3. Statistical analysis
4. Statistical design
5. Sociology of science.

1. Common sense: 5-10 years is a huge amount of lifetime. Even if you imagine dramatic causal sequences (for example, you lose an election and become depressed and slide into alcoholism and then drive your car into a tree), it’s hard to imagine such a huge effect.

2. Our experience as consumers of research: The recent history of social and behavioral science is littered with published papers that made claims of implausibly large effects, supported by statistically significant comparisons and seemingly solid research methods, which did not hold up under replication or methodological scrutiny. Some familiar examples to readers of this blog include the claim that beautiful parents were 8 percentage points more likely to have girls, the claim that students at Cornell had extra-sensory perception, the claim that women were three times more likely to wear red or pink clothing during certain times of the month, the claim that single women were 20 percentage points more likely to support Barack Obama during certain times of the month, and the claim that political moderates perceived the shades of gray more accurately than extremists on the left and right. We’ve been burned before. We’ve been burned enough times that we realize we don’t have to follow Kahneman’s now-retired dictum that “you have no choice but to accept that the major conclusions of these studies are true.”

At this point, I recommend that you pause your reading now and go to this post, “50 shades of gray: A research story,” and read all of it. It won’t take long: it’s just two long paragraphs from an article of Nosek, Spies, and Motyl and then a few sentences of remarks from me.

3. Statistical analysis: If there truly is no such large effect that losing an election causing you to lose 5 to 10 years of life, then how could these researchers have found a comparison that was (a) statistically significant, and (b) robust to model perturbations? My quick answer is forking paths. I know some of you are gonna hate to hear it, but there it is. The above graph might look compelling, but here’s what the raw data look like: 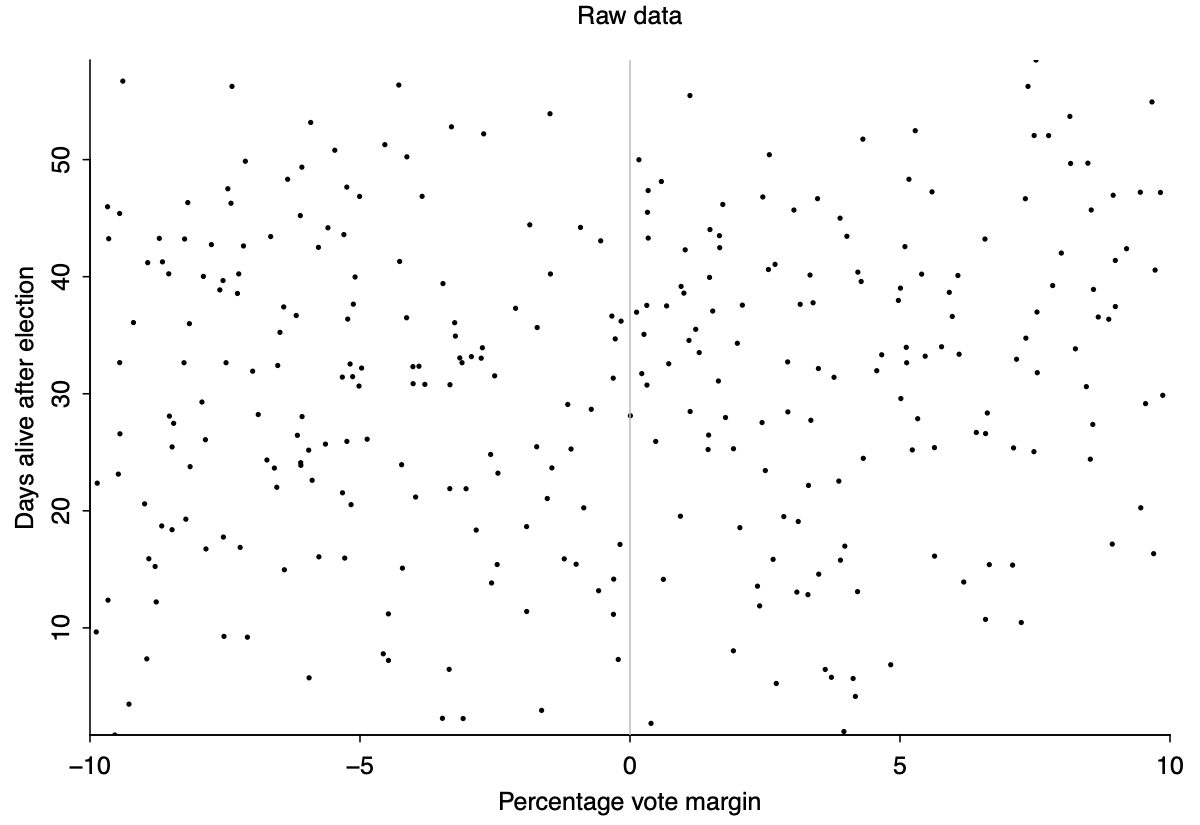 For ease of interpretation I’ve plotted the data in years rather than days.

Now let’s throw a loess on there and see what we get: 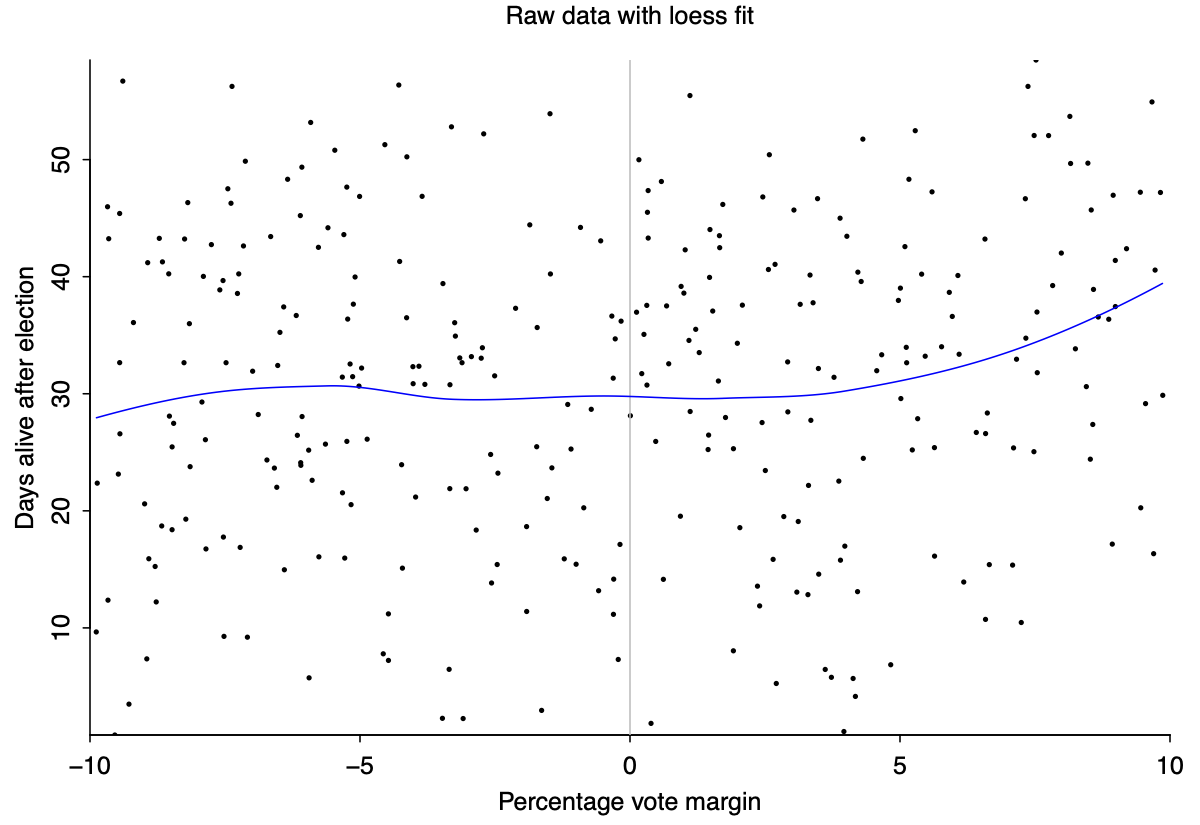 And here are two loess fits, one for negative x and one for positive x: 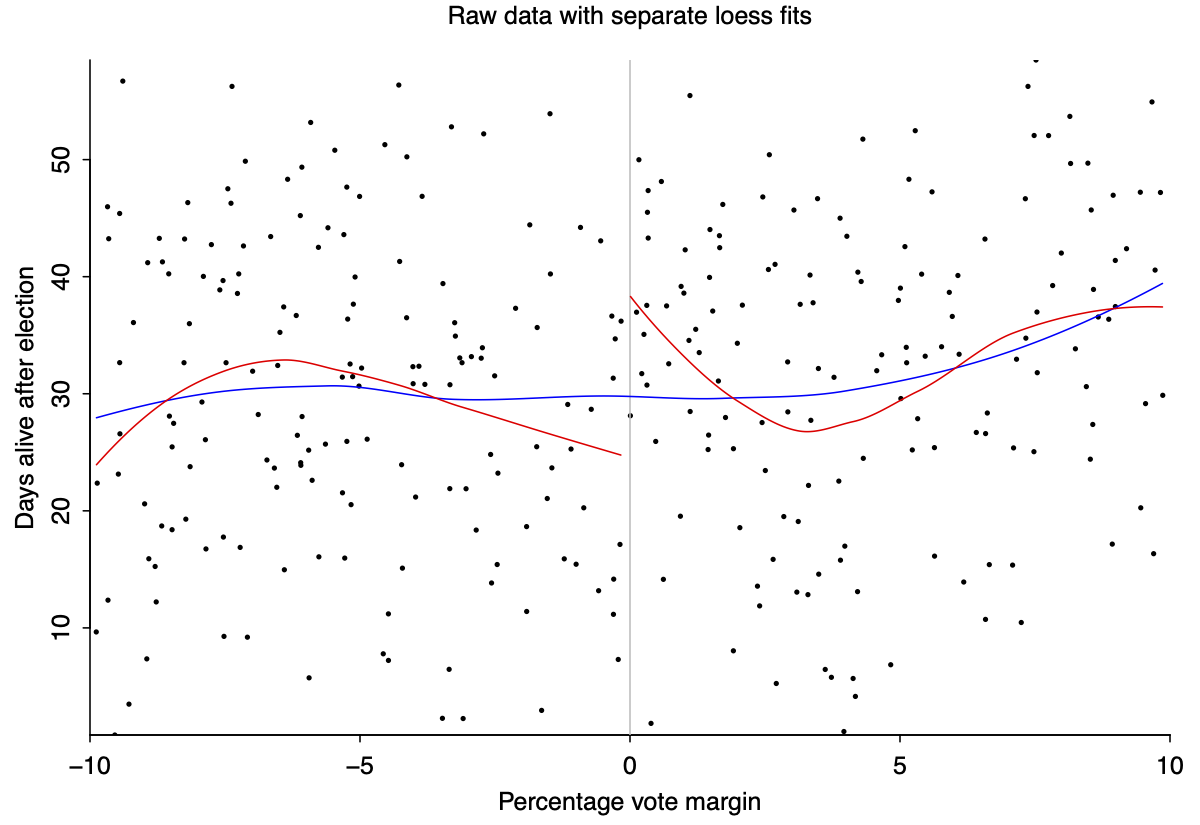 Yup. Same old story. Fit a negative slope right near the discontinuity, and then a positive jump is needed to make everything work out. The point is not that loess is the right thing to do here; the point is that this is what’s in these data.

The fit is noisy, and finding the discontinuity all depends on there being this strong negative relation between future lifespan and vote margin in this one election—but just for vote margins in this +/- 5 percentage point range. Without that negative slope, the discontinuity goes away. It’s just like three examples discussed here.

At this point you might say, no, the authors actually fit a local linear regression, so we can’t blame the curve, and that their results were robust . . . OK, we’ll get to that. My first point here is that the data are super-noisy, and fitting different models to these data will give you much different results. Again, remember that it makes sense that the data are noisy—there’s no good reason to expect a strong relationship between vote margin in an election and the number of years that someone will live afterward. Indeed, from any usual way of looking at things, it’s ludicrous to think that a candidate’s life expectancy is:
30 years if he loses an election by 5 percentage points
25 years if he loses narrowly
35 years if he wins narrowly
30 years if he wins by 5 percentage points.
It’s a lot more believable that this variation is just noise, some artifact of the few hundred cases in this dataset, than that it represents some general truth about elections, or even about elections for governor.

And here’s a regression. I show a bunch of regressions (with code) at the end of the post; here’s one including all the elections between 1945 and 2012, excluding all missing data, and counting the first race for each candidate who ran for governor multiple times:

The estimated effect is 2.4 years with a standard error of 2.4 years, i.e., consistent with noise.

But what about the robustness as reported in the published article? My answer to that is, first, the result is not so robust, as is indicated by the above graph and regression and demonstrated further in my P.S. below—and I wasn’t trying to make the result go away, I was just trying to replicate what they were doing in that paper,—and, second, let’s see what Uri Simonsohn had to say about this:

To demonstrate the problem I [Simonsohn] conducted exploratory analyses on the 2010 wave of the General Social Survey (GSS) until discovering an interesting correlation. If I were writing a paper about it, this is how I may motivate it:

Based on the behavioral priming literature in psychology, which shows that activating one mental construct increases the tendency of people to engage in mentally related behaviors, one may conjecture that activating “oddness,” may lead people to act in less traditional ways, e.g., seeking information from non-traditional sources. I used data from the GSS and examined if respondents who were randomly assigned an odd respondent ID (1,3,5…) were more likely to report reading horoscopes.

The first column in the table below shows this implausible hypothesis was supported by the data, p

People are about 11 percentage points more likely to read the horoscope when they are randomly assigned an odd number by the GSS. Moreover, this estimate barely changes across alternative specifications that include more and more covariates, despite the notable increase in R2.

4. Statistical design: Another way to think about this is to consider the design of such a study. A priori we might consider an effect size of one additional year of life to be large, and on the border of plausibility. But this study has essentially no power to detect effects this small! You can see that from the standard errors on the regression. If an estimate of 5-10 years is two or three standard errors away from zero, than an effect of 1 year, or even 2 years, is statistically undetectable. So the study is really set up only to catch artifacts or noise. That’s the point of the “Power failure” paper by Button et al. (2012).

5. Sociology of science: If you are a social scientist, statistical methods should be your servant, not your master. It’s very tempting to say that the researchers who made the above graph followed the rules and that it’s not fair to pick on them. But the point of social science is not to follow the rules, it’s to gain understanding and make decisions. When following the rules gives silly results, it’s time to look more carefully at the rules and think hard about what went wrong. That’s what (many) psychologists did after the Bem ESP debacle and the rest of the replication crisis.

Yes, it’s possible that I’m wrong. Perhaps losing a close election really did kill these candidates for governor. It’s possible. But I don’t think so. I think this paper is just another example of statistical rule-following that’s out of control.

This example we’re discussing here is a bit different. It’s a clean analysis with clean data. The data are even publicly available (which allowed me to make the above graphs)! But, remember, honesty and transparency are not enough. If you do a study of an effect that is small and highly variable (which this one is: to the extent that winning or losing can have large effects on your lifespan, the effect will surely vary a lot from person to person), you’ve set yourself up for scientific failure: you’re working with noise.

I’m not happy about this, but that’s just how quantitative science works. So let me emphasize again that a study can be fatally flawed just by being underpowered, even if there’s no other obvious flaw in the study.

P.S. R code is below. I followed the link at the published article and downloaded the data from here. The code didn’t quite run as is—the R code required a .csv file but all I could find was a .tab file, so I changed: