On February 29, R 3.6.3 was released and is now available for Windows, Linux and Mac systems. This update, codenamed ”Holding the Windsock”, fixes a few minor bugs, and as a minor update maintains compatibility with scripts and packages written for prior versions of R 3.6.

February 29 is an auspicious date, because that was the day that R 1.0.0 was released to the world: February 29, 2000. In the video below from the CelebRation2020 conference marking the 20th anniversary of R, core member Peter Dalgaard reflects on the origins of R, and releases R 3.6.3 live on stage (at the 33-minute mark).

R has advanced tremendously in the last 20 years, and the R language and the community around it shows no signs of slowing down, as demonstrated by this chart of R package downloads (from Jozef Hajnala’s excellent retrospective on R). 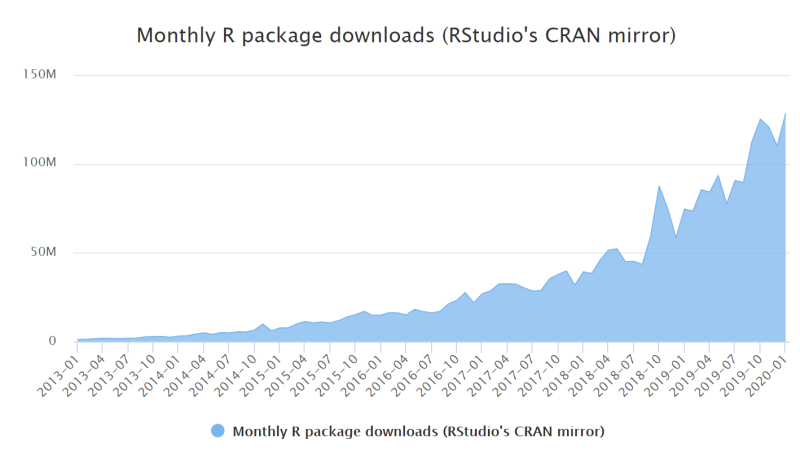 R 3.6.3 is likely to be the last update in the R 3.6 series, before R 4.0.0 is released on April 24 with many exciting new features. For more on R 3.6.3, including all the changes in this release, check out the official announcement on the link below.

Any cookies that may not be particularly necessary for the website to function and is used specifically to collect user personal data via analytics, ads, other embedded contents are termed as non-necessary cookies. It is mandatory to procure user consent prior to running these cookies on your website.