I recently was sent two documents regarding the recent Bolivian presidential election.

Andrés Castro pointed me to this report from the Organization of American Stats reporting audit results from the election.

The conclusions of this report are pretty harsh. For example:

Given all the irregularities observed, it is impossible to guarantee the integrity of the data and certify the accuracy of the results.

It should be borne in mind that the irregularities we have pointed out are those we observed in a short period of time. It is also important to point out that it was not possible to analyze the original tally sheets for the departments of Potosí, Chuquisaca, and Santa Cruz as part of the documentation had been burned. In all likelihood, given more time to process documentation, even more irregularities would surface.

On the other hand, I’ve heard that election security is pretty bad in the U.S. too, so it’s hard for me to know what to make of all this.

They also have some graphs showing vote counts changing over time. They don’t do themselves any favors with model fits such as this plot of the vote share received by incumbent president Evo Morales over time:

The discontinuity analysis is a joke, maybe suitable for publication in the Proceedings of the National Academy of Sciences but I wouldn’t expect to see it any serious report. But in any case it’s clear that the votes were different, on average, at different points in the vote-collecting process.

The report states: “Morales average vote share increased by over 15% compared to the previous 95%, while Mesa’s average vote share plunged by about the same percentage. This pattern is highly unusual.” I’m not sure what is the baseline of what is considered usual here. I guess it depends on how the votes were counted.

David Rosnick sends along this report, coauthored with Guillaume Long, Cavan Kharrazian, and Kevin Cashman, “What Happened in Bolivia’s 2019 Vote Count? The Role of the OAS Electoral Observation Mission.”

They give some background:

The TSE has two vote-counting systems. The first is a quick count known as the Transmisión de Resultados Electorales Preliminares (TREP, hereafter referred to as the quick count). This is a system that Bolivia and several other Latin American countries have implemented following OAS recommendations. . . . and is designed to deliver a swift — but incomplete and not definitive — result on the night of the elections to give the media an indication of the voting tendency and to inform the public. The TSE is unlikely to process 100 percent of the results in the quick count in nationwide votes due to logistical limitations and the amount processed can vary widely by geography and the type of ballot. . . .

The second vote-counting system is the official count (or cómputo), which is legally binding under Bolivian law. The official count is more thorough and precise and takes longer. It is the only valid vote tallying system, and the TSE uses it to determine and announce the final election results. . . .

In these elections, the results of the official count generally coincided with those of the quick count, which ended once 95.63 percent of tally sheets were counted, with Morales having a lead of 46.86 percent to Mesa’s 36.72. The final official count, with 100 percent of votes counted, resulted in Morales winning the election in the first round with 47.08 percent, to Mesa’s 36.51 percent.

And then they argue against the conclusions of the OAS report:

In line with the quick count process in previous elections, the TSE had ended the quick count at 83.85 percent of tally sheets verified. This tally showed MAS-IPSP receiving 45.71 percent of the presidential votes, and CC receiving 37.84 percent, a difference of 7.87 percentage points. Two days later, the OAS mission issued its preliminary report on the elections, which briefly repeated the criticism that “the changes in the TREP [quick count] trend were hard to explain and did not match the other measurements available.” . . .

The results from the quick count for the first 83.85 percent of the vote count are consistent with a final projected result of Morales winning the election outright with a more than 10 percentage point victory . . .

Neither the quick count nor the official count exhibit significant changes in voting trends in the final results; rather, the same well-known trend, explainable by differences in voter preferences in different geographical areas, is evident in both counts . . .

And they offer this graph: 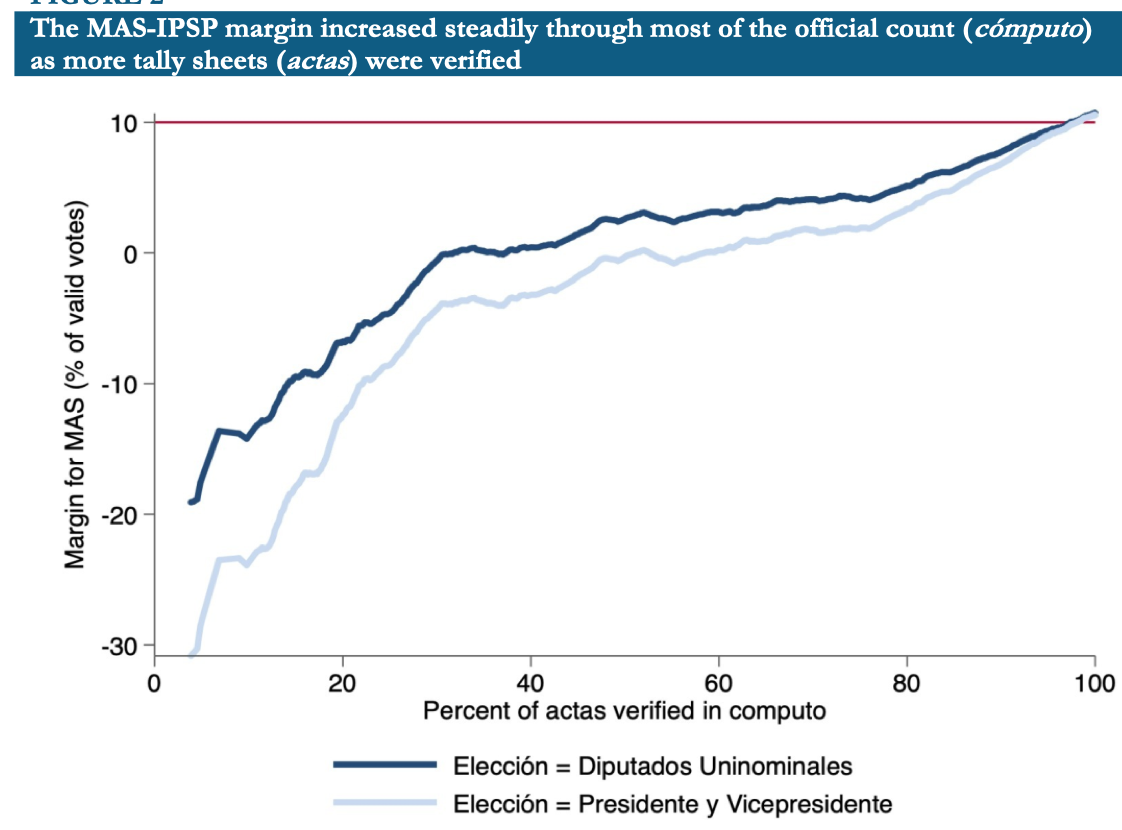 I am no Bolivia expert so I won’t try to weigh the evidence. I agree with the authors of the second report that the vote trend does not seem like enough evidence to claim irregularities. But I don’t know enough to have any opinion on the particular claims regarding problems with vote counting.