Or, should I say, a pretty graph and so have some questions. It’s a positive property of a graph that it makes you want to see more.

Cuebiq, a private data company, assessed the movement of people via GPS-enabled mobile devices across the U.S. If you look at movement data in a cross-section of states President Trump won in the southeast in 2016 — Tennessee, Georgia, Louisiana, North Carolina, South Carolina and Kentucky — 23 percent of people were staying home on average during the first week of March. That proportion jumped to 47 percent a month later across these six states.

And then they display this graph by Julia Wolfe: 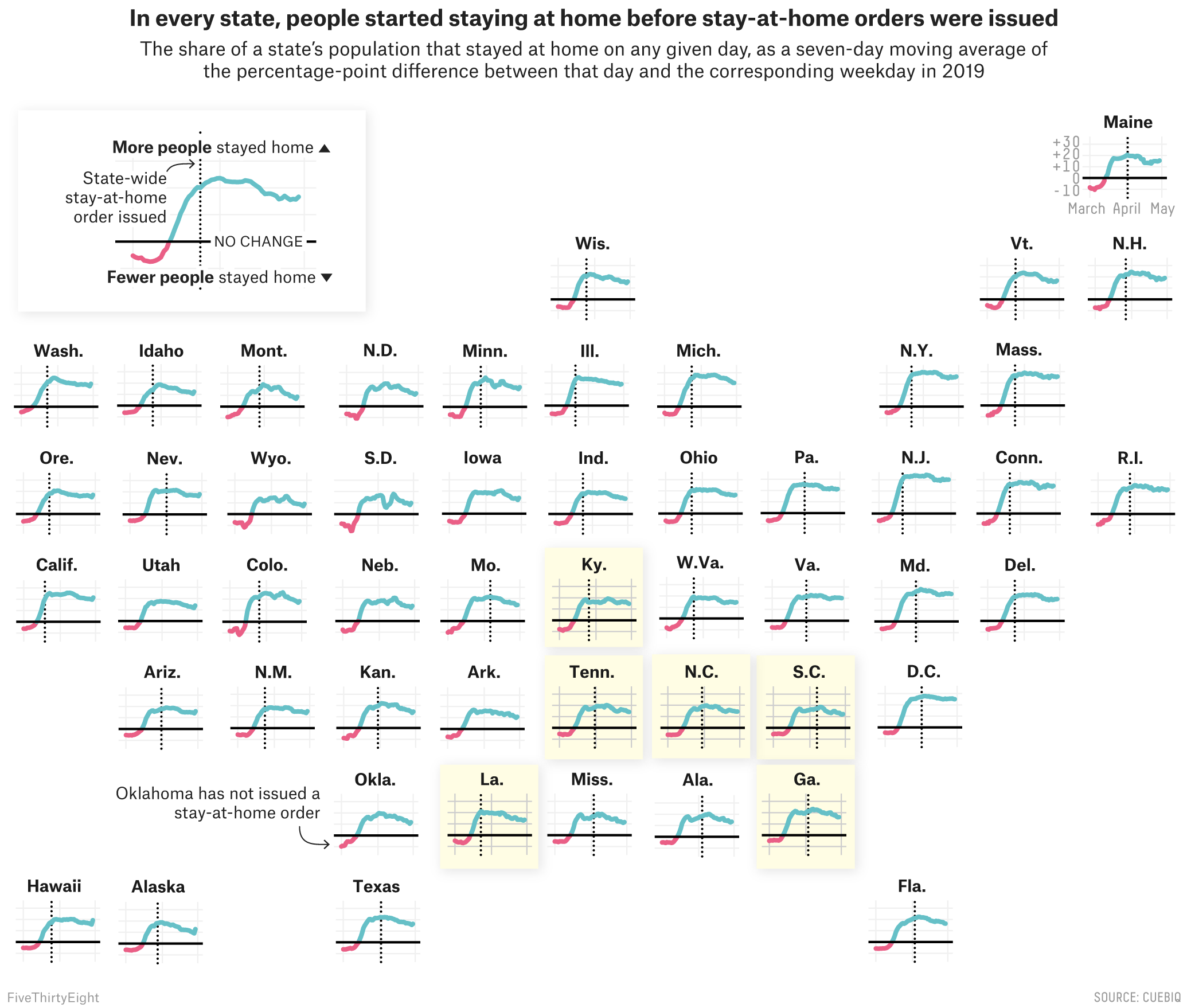 So here are my questions:

2. I’m surprised that it says that the proportion of New Yorkers staying at home increased by only 30 percentage points compared to last year. I would’ve thought it was higher. Maybe it’s a data issue? People like me are not in their database at all!

3. It’s weird how all the states show a pink line—fewer people staying at home compared to last year—at the beginning of the time series (I can’t quite tell when that is, maybe early March?). I’m guessing this is an artifact of measurement, that the number of GPS-enabled mobile devices has been gradually increasing over time, so the company that gathered these data would by default show an increase in movement (an apparent “Fewer people stayed home”) even in the absence of any change in behavior.

I’m thinking it would make sense to shift the numbers, or the color scheme, accordingly. As it is, the graph shows a dramatic change at the zero point, but if this zero is artifactual, then this could be misleading.

I guess what I’d like to see is a longer time series. Show another month at the beginning of each series, and that will give us a baseline.

Again, it’s not a slam on this graph to say that it makes me want to learn more.

The above-linked article discusses the idea that people were already staying at home, before any official stay-at-home orders were issued. And, if you believe the graphs, it looks like stay-at-home behavior did not even increase following the orders. This raises the question of why issue stay-at-home orders at all, and it also raises statistical questions about estimating the effects of such orders.

An argument against stay-at-home or social-distancing orders is that, even in the absence of any government policies on social distancing, at some point people would’ve become so scared that they would’ve socially distanced themselves, canceling trips, no longer showing up to work and school, etc., so the orders are not necessary.

Conversely, an argument in favor of governmentally mandated social distancing is that it coordinates expectations. I remember in early March that we had a sense that there were big things going on but we weren’t sure what to do. If everyone is deciding on their own whether to go to work etc., things can be a mess. Yes, there is an argument in favor of decentralized decision making, but what do you do, for example, if schools are officially open but half the kids are too scared to show up?