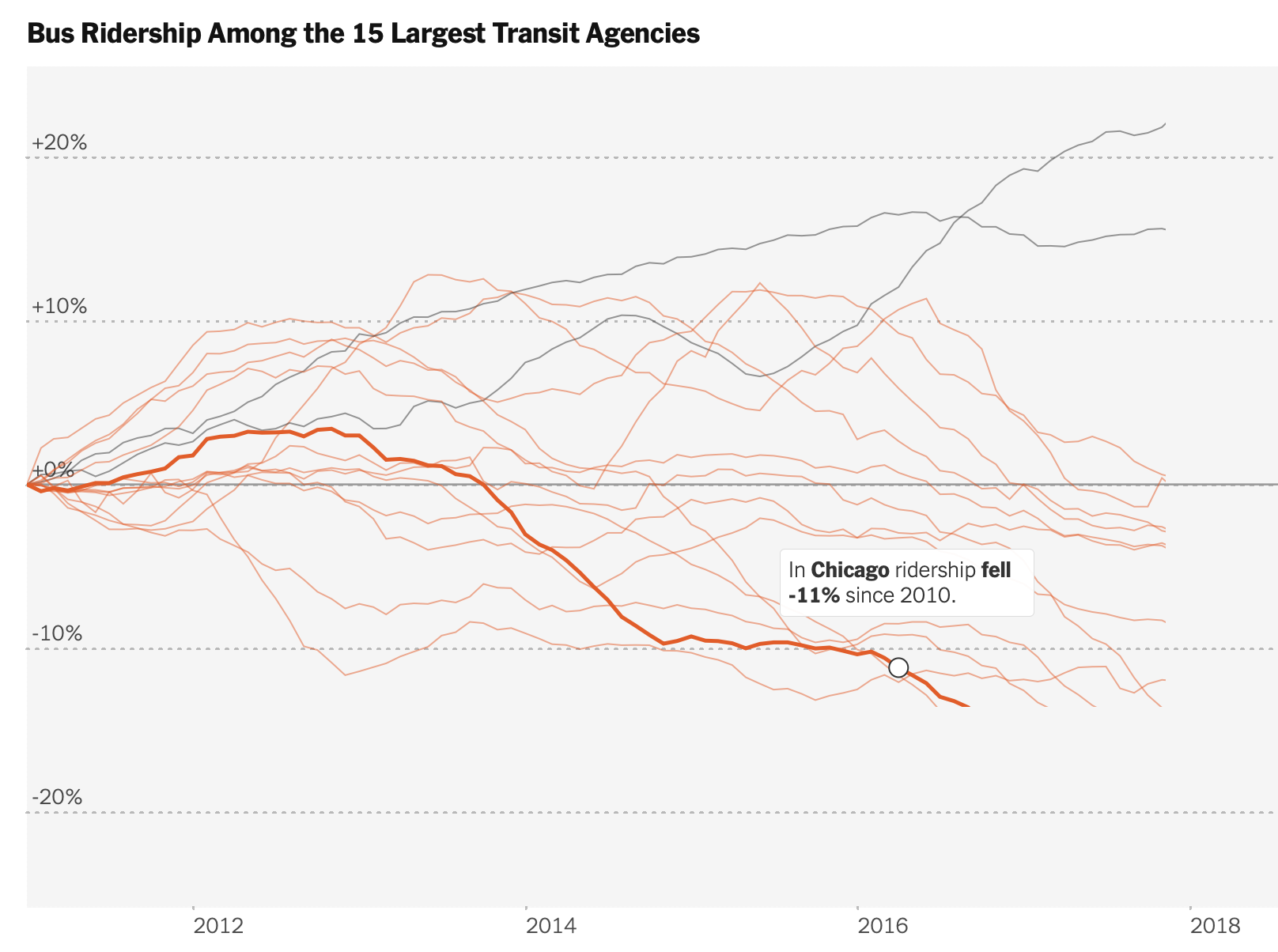 This article on bus ridership is right up your alley [it’s a news article with interactive graphics and lots of social science content].

The problem is that they’re graphing the wrong statistic. Raw ridership is of course sensitive to total population. So they should have been graphing is rates per person, not raw rates. I grant you that maybe populations didn’t change that much over the time concerned — but I don’t know that! At least they should have said something about the necessity of that assumption and possible distortions it could cause in their “analysis.” Note that the ensuing discussion in the article speculated about explanations for a decline in the individual propensity to ride (financial, age,…) for which the per person frequency should be the basis, not the per city.

My reply: I agree that they should’ve divided by population. Actually, I think best would be to divide by population * days, so that what they’re plotting is average number of bus rides per person per day. That’s a number that is directly interpretable. For example, 0.1 bus rides per person per day corresponds to 10% of the people in the city riding the bus once that day, or 5% riding the bus twice. The number is still only approximate, as suburbanites and visitors ride the bus too, but it’s at least roughly interpretable.

This sort of thing comes up a lot, the value of rescaling statistics to be on the human scale. Such rescaling is not always so easy—for example, reporting suicide rates per 100,000 is pretty much uninterpretable, but it’s not clear how to put such a rare event on unit scale—but we should do this when we can.

It also looks like they screwed up on the above graph and there was some software setting that cut off the lines when they went below -13%.

My other comment is about the bus riding experience itself. The authors talk about buses vs. trains and bikes and cars, but I don’t see anything about what it feels like to actually ride the bus, except for a brief mention of bus lanes. I like riding the bus, but not when it stops every two blocks, when it has to swerve in and out of traffic after each bus stop, when it stops at just every traffic light, when I have to wait 20 minutes for the bus to show up in the first place (particularly annoying because if you’re not staring eagle-eyed at the street, the bus might come by and not stop for you), etc etc. Lots of these problems are potentially fixable, for example by putting bus stops in the middle of the street and running smaller buses more frequently rather than huge buses further spaced in time.