Do you realize that everyone you know someday will die
And instead of saying all of your goodbyes, let them know
You realize that life goes fast
It’s hard to make the good things last
You realize the sun doesn’t go down
It’s just an illusion caused by the world spinning round

I teach a Math Methods class that covers basic probability, mathematical modeling, and data science. For one of my upcoming lectures I plan on applying the very simple tools that we’ve covered so far to COVID-19. As I’m sure you’re aware, there are very dire predictions for the total number of Americans that will die from COVID-19, ranging from 0.5–3M. However, I wanted to connect these impersonal numbers to a very basic question:

* What is the probability that someone you know will die from COVID-19?

You don’t need much to answer this question. You need an estimate of the infection fatality risk (IFR), an estimate of the proportion of the population that will become infected (infection risk, IR), and the number of people that a person knows on average. Coincidentally, in 2013 you published an article in the NYTimes on the latter. Your answer was 600 people. 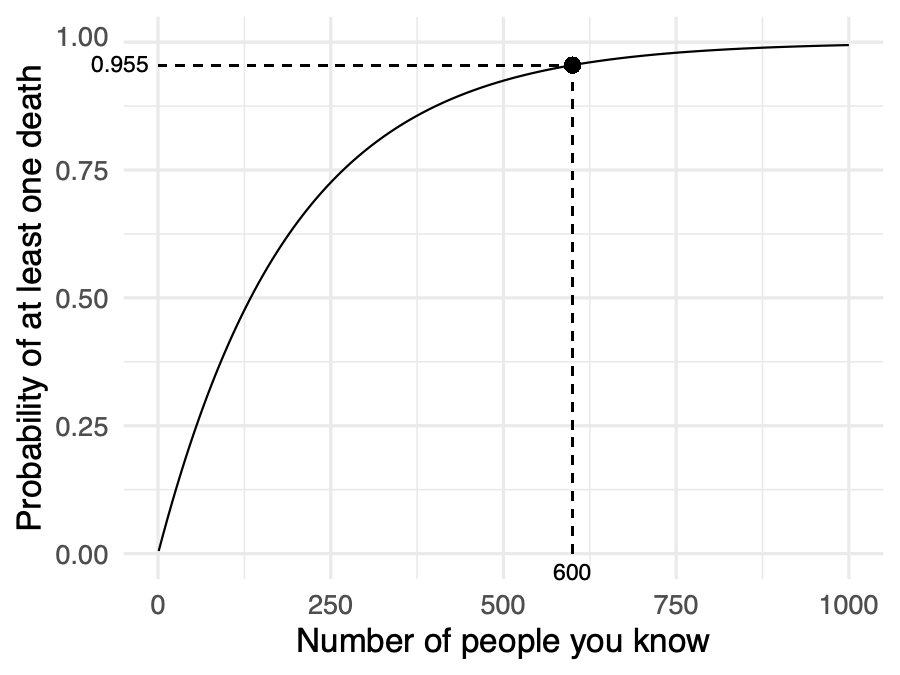 I haven’t checked the above numbers, but if they’re correct, then I think Sims’s final estimated probability is an overestimate because it ignores correlation in the network. Observed properties of social networks show overdispersion, thus more zeroes and more high values than you’d expect from a purely random selection of people. But it’s a good teaching example in any case, as well as relating to general themes.

Also I think it makes sense to calibrate this by asking, What’s the probability that someone will die from cause X this year?, for different X’s. The survey we analyzed way back when asked respondents a bunch of questions, including how many people they knew who died from homicide, suicide, and auto accidents in the past year. I haven’t accessed this dataset in awhile, but I just pulled it into R and did some quick calculations, and it seems that 11% of respondents said they knew at least one homicide victim in the previous twelve months, 14% said they knew at least one person who committed suicide in the previous twelve months, and 25% said they knew at least one person who’d died in an auto accident in the previous twelve months. That survey was conducted in 1999, a year in which there were approximately 15,000 homicides, 30,000 suicides, and 40,000 people dying in auto accidents in the United States.