A few days ago I posted some thoughts about the coronavirus response, one of which was that I wanted to see ‘years of life lost’ in addition to (or even instead of) ‘deaths’. Mendel pointed me to a source of data for Florida cases and deaths, which I have used to do that calculation myself for that dataset. The plots below show:
(Top) Histogram of deaths as a function of age, colored by sex because why not, although I would rather color them by ‘number of comorbidities’ or something else informative, since the difference by sex isn’t all that big.
(Middle) Points are expected years of life remaining for a person of a given age, from the Social Security Administration; and the lines are from a model that I fit to the points in order to get a continuous function of age that runs from birth to…well, to any age, although it predicts the same number of remaining years of life (or rather months of life) for anyone over 108 years old.
(Bottom) Histogram of ‘expected years of life lost’, calculated using the functions shown in the middle, i.e. a function of age and sex only. This is presumably an overestimate because the people dying of COVID-19 were probably already sicker (and thus set to be shorter-lived on average) than their same-age peers, although perhaps not as much as news reports might suggest: sure, most COVID-19 deaths of people over 80 are of people who have several “co-morbidities”, but most people over 80 have some health issues so it would be very surprising if that weren’t true. 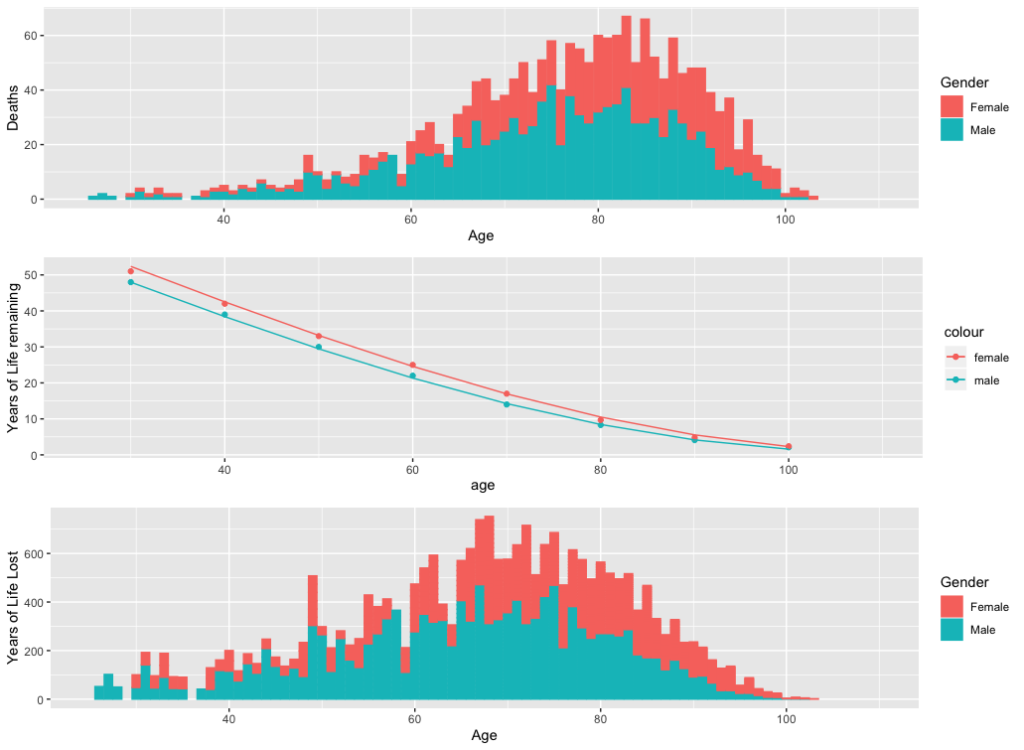 The data through 5/12 include 1849 deaths, which the model predicts to represent 23177 years of life lost; that’s an average of about 12.5 years lost per death, but see the caveat in the explanation of the bottom plot. Is this a lot or a little? Daniel Lakeland has suggested dividing the years of life lost by 80 to get an equivalent number of lifetimes, where ‘equivalent’ just means equivalent in terms of life-years lost; in this case that gives us about 290, so the deaths of these 1849 people represent about the same loss of life-years as the death of 290 infants. This is not meant to imply that the tragedy is equal either way, it’s just a way to put this in terms that are easier to understand.

It will be interesting to see if the YLL distribution (and the deaths distribution) shift towards lower ages as the pandemic progresses. At least in California most of the new cases are among workers. If better hygiene and social distancing have released the spread of the virus among the old, but it continues among the young, then we would expect to see fewer cases become deaths, but each death will represent more years of life lost.